This coming Tuesday, February 8, an album entitled See You by artist Josh Wilson will be hitting the shelves. I confess to never having heard of Josh Wilson before being given the opportunity to review See You, and, if this album is any indication, I have been missing out on a treat. 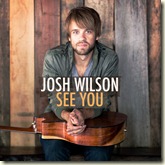 Musically, See You, is definitely a great success. Excellence radiates through Wilson’s work, flowing from track to track in musical arrangement and presentation. As I sat down to listen the first time, I had high expectations because of the press release I’d read revealing the intensity Wilson had put into this album, including the mastery of twenty instruments outside the typical range of album instrumentation. I must say, I was not disappointed. Stylistically, See You is quite varied, incorporating a wide assortment of techniques and instrumentation to keep the listener stirred and never bored. Only one song didn’t “grab” me musically the first couple of times through the album, but it has grown on me.

My biggest critique of Christian contemporary music these days does not lie in the musical and stylistic presentation, however. So many Christian artists have catchy music but fail miserably when it comes to lyrical meat. Songs are fluffy and offer very little in the way of spiritual depth or even reliable, Scriptural truth. Having only really paid attention to the instrumentation during my first listen of See You, I was curious if Wilson’s lyrical effort would live up to the musical excellence.

Again, I was not in the least disappointed.

Wilson put as much effort into the lyrical content of his album as the musical. The lyrics are easy to discern while blending well with the musical style. He ranges in theme from the reality that we just can’t help but see God’s presence around us and praise Him to the question of whether or not He’s really there in the darkest times. He is not afraid to be specific and deal with real issues. To truly discuss life as it is. In the middle of it all is a fun love song, almost seeming to remind us that our relationships with one another are an integral part to the times of both struggle and praise in this life.

Even after only a couple of listens, Wilson’s songs stuck with me. I look forward to “getting to know” Wilson better as an artist, and will probably go back and explore his previous two albums.

I received digital access to this album from the {m} media collective in exchange for my honest review.