Historical fiction is, I believe, my favorite literary genre. Whether it gives a glimpse into the lives of every day people or a more intimate view of what historic events might have been like, I find myself more absorbed in such stories than in any other.

The Girl in the Gatehouse by Julie Klassen is definitely 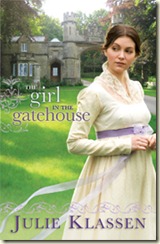 a novel worthy of that love for historical fiction. Set in the early 1800’s, this novel gives readers a glimpse into multiple aspects of early nineteenth century British culture.

Young Mariah Aubrey has been banished from her home over a scandal that has left her heart broken and her existence lonely. Forced to find a way to support herself and her loyal companion, Mariah writes novels anonymously, knowing that having her name attached to a published work would serve to only increase her shame in the eyes of her father.

Mariah’s exiled home is the long-abandoned gatehouse on her aunt’s second husband’s estate. When her aunt passes away, a young naval captain, attempting to prove himself worthy of a young woman of great status, leases the grand estate. The friendship that arises between exile and captain lead them to discoveries neither would have imagined.

Author Julie Klassen does a phenomenal job of weaving multiple stories together and bringing them all successfully to a beautiful and unified conclusion. She is skilled at weaving a mystery that can hold its revelation until the appropriate time. Klassen also created a beautiful heroine in Mariah Aubrey, a young woman who came face to face with the consequences of her own sin, yet did not allow herself to be drawn into the mire because of it.

My sole complaint about The Girl in the Gatehouse is found in the spiritual aspect of the book. Instead of either leaving the spiritual completely alone or fully developing it, Klassen simply hinted at it. Mariah goes from struggling with her sin to suddenly having laid hold of forgiveness with no development of the idea. Captain Bryant searches his own spiritual condition in a scene which holds much promise for development, but then the book ends with no further discussion of the issue. While I do not feel that every book – even every book published as a Christian fiction novel – requires specific spiritual development, I think the author should have chosen to go one way or the other. It was frustrating to me as a reader to have the spiritual merely toyed with.

That one complaint aside, I thoroughly enjoyed The Girl in the Gatehouse and I would definitely recommend it. I also have another novel by the same author awaiting me on my Kindle, and I am looking forward to reading more of her work.

This book was sent to me by Bethany House in exchange for my honest review. A favorable review was not required.

2 thoughts on “The Girl in the Gatehouse by Julie Klassen”