I cannot remember the first time I read the folktale The Three Trees. But, I was immediately captivated by it. Such a simple story that so beautifully captures not only the life of Christ, but also the way His presence fulfills hopes, dreams, and desires in ways we could never imagine. It has long been among my favorite children’s stories.

This year a new version of The Three Trees was released, written 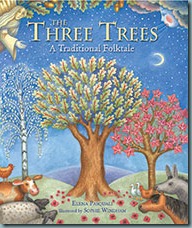 by Elena Pasquali and illustrated by Sophie Windham. Pasquali’s version of the story is simple, a perfect length for reading aloud to toddlers and preschoolers. But, it is not so simple that older children would not be equally captivated by this precious story.

I think, however, that the strength of this version of The Three Trees lies in Sophie Windham’s beautiful illustrations. At first glance they seem extremely simple, their two-dimensional nature almost over-emphasized. A longer look, though, illuminates the precious detail in each picture, enhancing every word of the story.

There are times when a new release of an old story is unnecessary at best. This is not one of those times. Pasquali and Windham have produced a precious version of The Three Trees, one which I am delighted to own.

This book was sent to me in exchange for my honest review.