Country artist Sarah Darling has a sweet new song entitled "Home to Me." As you can imagine, it is a love song about how her relationship just feels like home. It set my mind thinking, though, about what exactly creates that home feeling for me.

Obviously, home is where my family is. As long as I can be with my husband and children, I know I am at home. But, I knew that home feeling long before marriage and family came along. So, there has to be something more to the nature of being at home.

I spent many of my growing up years in the beautiful hills of north Jordan. I have never been a real outdoors sort of person, yet I still find that nothing speaks of the closeness of God more than His creation. I can tell you, those Jordanian hills 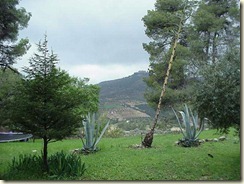 spoke! One of my bedroom windows faced a valley which then rose up to another hill. An old crusader castle topped that next hill, and I could sit forever just gazing from my hill to the neighboring one. Sometimes I could see for miles through the valleys nestled among the various hills leading to the west. Other days, fog banks rolled through the valleys, obscuring the lowest points while the hilltops stood out in sharp contrast. Even on the days when the clouds hung low and the old castle was obscured, the view was still breathtaking to me.

We lived on a large mission compound, and many prime hideaways faced my beloved castle hill. A stone bench behind the house next door; a huge pine tree growing close to a terrace wall at the perfect height to reach the climbing branches; a little dip in the hillside where the scene before me ran down into the valley and no one could see me from behind. Places like these created refuges for me. Those were the places where I knew I could just be myself. I could cry, laugh, 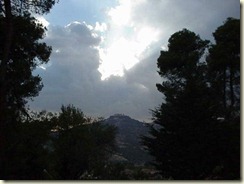 talk to myself, make up stories, write, read, or just be. That was home to me.

When Iraq invaded Kuwait in the summer of 1990, we had to leave home. Our first stop was the Island of Cyprus, the one neutral location where foreigners living anywhere in the Middle East could travel. A few weeks after we arrived, the tourist season ended and we were able to secure cut rates on beach condos. A marked difference existed between my beautiful hills with the castle view and this beach scene. I quickly discovered, however, that I could find home even here. I put on a snorkel, lathered my back with sunscreen, and spent what felt like hours (but was probably not even thirty minutes!) at a time floating and watching the tiny life darting about on the sea floor. On cooler days, I perched on a huge boulder on the beach and watched the waves roll in or the ships anchor in the neighboring harbor.

I realized something as I felt just at home there as in my beloved Jordanian hills. I am a very visual person and need the visual stimulation to find that "home" feeling. But, the real sense of home was not what I saw. It was communion. You see, I learned to commune with my Savior in those Jordanian hills. When I really needed to be uninhibited in my interaction with Him, I went to those favorite places. The beaches of Cyprus offered a very different environment, but the effect was the same. I had communion with Christ.

We went from Cyprus to Madrid, Spain, and it was a little harder there for me to find the visual environment to stimulate that home feeling. But, I did find it. In college I knew it at the gazebo on the Ouachita River or even all by myself in a racquetball court. As my family has grown and we have moved to various locations, finding a hideaway has not always been easy, but I often can simply close my eyes and picture one of those havens of my youth. I smile and know that feeling of home.

The home of communion is not always related to a physical place like it is for me. Some find it in music or art. Others find it in the company of people. What about you? Where is home for you? May you dwell in that place today, in perfect communion with your Savior.