Curiosity led me to pick up Patrick W. Carr’s first novel several years ago. The guarantee of captivating writing from an incredible mind left me impatiently awaiting every subsequent novel, including The Shock of Night, book one in Carr’s newest Darkwater Saga series.

The Shock of Night introduces Willet Dura, a man regarded to be of good character, yet 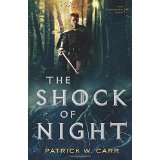 one who guards a secret even he does not understand. As a reeve in service to his city and his king, Dura has no prominence of his own – until he becomes a part of an investigation involving a dying priest and his savagely murdered assistant. Pulled to the priest’s side for his dying breath, Dura departs only to find himself in possession of a strange ability, an ability which draws the attention of an equally mysterious group known as the Vigil.

In a world where gifts mean the difference between success and poverty, intrigue and betrayal are near at hand, and the evil Darkwater Forest fills the entire region with fear, Willet Dura is driven to find answers. Not only to solve a murder, but to solve the mystery of his own mind – a mind that seems frighteningly bound to experiences in the Darkwater Forest.

Character development, amazingly enough, is the hinge upon which The Shock of Night swings. All of the mystery, intrigue, and intricate story lines are woven together as morsels of personality, history, and behavior are revealed. Yet, nothing is as simple as it seems. Is Willet Dura truly the good man others claim him to be? Can he be trusted? Can the Vigil? Who are they really? And what is the truth behind characters like Ealdor?

As I read, I found myself drawn into the characters and the story simultaneously. I wanted to get to know Dura and delve into the truth of other characters. I wanted to explore events through their eyes and ferret out the truth alongside them.

But, there is even more to The Shock of Night than intense character development,
intricate storyline, and deep mystery. There is also the realization that Carr was able to leave behind the complex world of Errol Stone of The Staff and Sword series and delve into the creation of an entirely new fantasy. Although similarities must exist (don’t all fantasy worlds have some commonalities?), Carr has created new personalities, societal structures, and villains, all intersecting in new forms of threat. And, I anticipate the progress and conclusion will be just as original as the series continues to unfold.

I must add one side note here: Don’t miss By Divine Right, the prequel novella to this new book and series. Although it is not essential to the plot of The Shock of Night, it is definitely helpful. And, it’s free for Kindle, so why not snag it?

Yes, The Shock of Night was worth the wait. I have no doubt that The Shattered Vigil, book two in the series, will be worth it as well. (Although, I must admit my impatience, as the story is very much left hanging at the end of The Shock of Night!) And any novel by Patrick W. Carr is worth exploring for the first time – or the tenth. I guarantee each reading will reveal intricacies you never noticed before!

I received this book from Bethany House in exchange for my honest review.