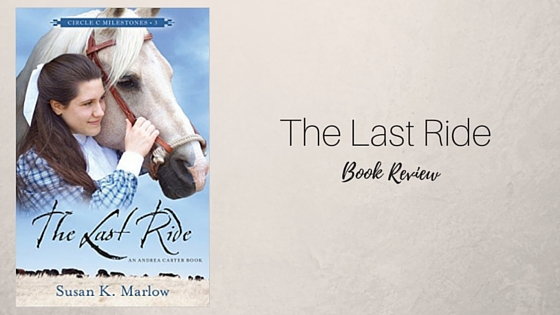 In the ever-continuing search for new books for my children, we discovered Susan K. Marlow’s Circle C books several years ago. Although we did not start at the beginning, my son has enjoyed jumping into the adventures of Andrea Carter. So, he was happy to receive The Last Ride, the newest book in the Circle C Milestones series.

Three different series chronicle Andrea Carter’s adventures on the Circle C Ranch. The Circle C Milestones series follows Andi as she navigates the years from fourteen to eighteen. But, the stories are still appropriate for my nine-year-old son. The first few books of this particular series only appealed to him, not to my older daughters (ages twelve and fourteen). This most recent addition, however, fit their reading interests as well.

In every Andi Carter adventure, there has been a major event of some sort that has forced Andi to explore God’s solution to a problem. The Last Ride was no exception. The actions of a self-absorbed, lying cousin leave Andi bitter and brokenhearted, and her emotional struggles affect every aspect of her life and relationships.

When the actions of other people cause heartache that cannot be reversed, it’s hard to consider forgiveness in light of our pain – especially when those causing the hurt refuse to change, acknowledge the error of their ways, or repent. Teaching children to forgive is not easy, but it’s even more difficult in situations such as the one Andi encounters. The Last Ride story forces readers to explore heartbreak and the difficult challenge of forgiveness following circumstances that can never be “fixed.”

In my opinion, The Last Ride is the best Circle C novel I have read. Admittedly, I have only limited exposure to the Circle C Beginnings and Adventures series, so my comparisons mostly relate to this older series. But there’s a nice depth to The Last Ride that we all really enjoyed.

Even so, we were all still able to follow The Last Ride without difficulty.

In an effort to not give away any more of the plot, I will simply say that The Last Ride is a book I would recommend, especially for readers in the 9-14 age range. It is a good read as well as being a good resource for teaching our children what forgiveness looks like.

I received this book from Kregel Publications in exchange for my honest review.