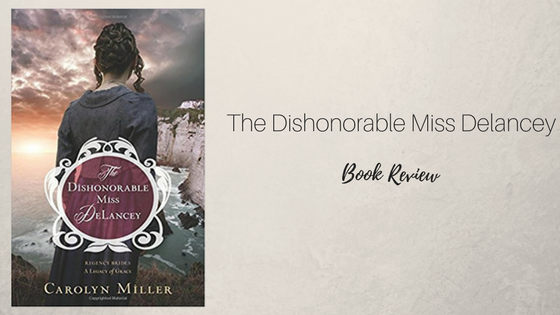 When you pick up a novel that includes romance, it is almost always obvious from the beginning which characters will fall in love by the end. The challenge for an author is to recognize that the conclusion is not a mystery, yet keep the reader wondering how in the world it could possibly come to fruition. That is the key to writing romance well, and it is a key that Carolyn Miller handles with finesse.

The Dishonorable Miss DeLancey is book three of Carolyn Miller’s Regency Brides: A Legacy of Grace series. I was introduced to the series this spring with The Elusive Miss Ellison, and enjoyed book two, The Captivating Lady Charlotte over the summer. The delight of the series is such that, although it was relatively easy to see which character the author would focus on in each subsequent release, the playing out of each lady’s story was anything but predictable. In fact, Carolyn Miller tackles quite the challenge with this third title when she takes a young lady who was somewhat of a villain in the first two books and turns her into the lead character of The Dishonorable Miss DeLancey.

Miss Clara DeLancey was once among the most eligible of London’s high society. But when the Earl of Hawkesbury, the one man who held her interest, rejected her in favor of the “unworthy” Lavinia Ellison, bitterness toward both the earl and his bride buried itself deep into her soul. Then, if the rejection had not caused enough damage, scandal visited her family in another fashion, reducing them from the most admired of London society to the subjects of juicy gossip. Retreating to a modest life in Brighton, Clara finds every foundation of her life – her beauty, wealth, and status – stripped away, leaving her with little to stand on.

Clara finds herself unexpectedly drawn to Mattie McPherson and Tessa Kemsley, two sisters who exhibit a genuine love unlike anything she has ever known. Unfortunately, the Viscountess Winpoole, Clara’s mother, still clings to the pride of their station and considers her daughter’s newfound friends to be appalling company. But something stronger than society and status keeps the desperate Miss DeLancey hungry for the company of her new friends, not to mention their somewhat intimidating brother, Captain Benjamin Kemsley.

Anyone who has read the first two books in the Regency Brides: A Legacy of Grace series will expect a beautiful romance in The Dishonorable Miss DeLancey. But the true beauty of this novel is not the love story between and man and a woman. It’s the love story of redemption. Of the way God works in even the most prideful of hearts, turning them toward Himself. This story is woven naturally and seamlessly into the fabric of the novel, turning a delightful historical romance into something so much deeper.

My girls and I have fallen in love with the Regency Brides series and definitely recommend all three titles!

This book was sent to me by Kregel Publications in exchange for my honest review.

I am a homeschooling preacher's wife and content editor for the Well Planned Gal. But, I also love to write just for the fun of it. I also process best through writing, and my thoughts tend to flow from things I learn through the Bible, interacting with my family, and moving through life in general. Thanks for joining me in my not quite ordinary journey. View All Posts