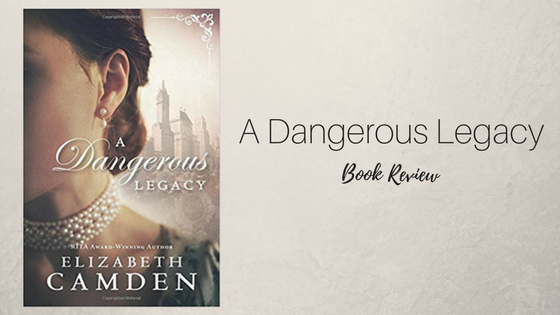 Recently, I’ve come across a few books I thought I’d reviewed, but realized I never actually did! So, over the next few weeks, I’ll be fitting them in between reviews of current books.

The first in the list is A Dangerous Legacy by Elizabeth Camden. As a long-time Camden fan, it has been fun to read each new title and see how she has evolved – and stayed the same – as a writer. Her job as a research librarian seems to keep her creativity flowing as she discovers new and fascinating tidbits of history to combine with her delightful imagination, weaving engaging stories that combine historical facts, intrigue and mystery, engaging characters, and genuine romance.

In A Dangerous Legacy, Lucy Drake and her brother Nick have poured their lives and resources into a single goal: regaining rightful control of their grandfather’s invention. Unfortunately, their opponents have seemingly unlimited resources and influence to keep Lucy and Nick stuck on the losing side of the legal battle. Lucy’s job with the Associated Press provides her a secret weapon in the fight, but will it be enough?

Matters complicate even further when Lucy meets Sir Colin Beckwith, the new man in charge of Reuters, Britain’s news agency and rival of the Associated Press. The two agencies share a building and certain resources, at least for the time being. The partnership leads Lucy and Colin into a tentative friendship that cannot help but grow in depth. But, each one carries burdens, responsibilities, and secrets that no amount of friendship seems capable of breaching.

Every aspect of the story in A Dangerous Legacy reinforces Elizabeth Camden’s skill as a storyteller capable of weaving history and fiction, romance and real character development. But something felt different as I read this particular novel. It seemed that there was not enough room for the depth of development Camden usually manages to pull off. Lucy and Colin are, to be sure, explored beautifully. Their characters deal with life and issues that have no clear solution, and the resolution of their story fits with the reality that sometimes the answer arrives from a completely unexpected direction. There was something delightfully unexpected about the way events twisted and turned to their final conclusion.

But, then there was Nick Drake. As I read, I could not help but feel that I was supposed to be getting to know him better. That his story was there, waiting to be exposed and explored. That his interactions were essential, not to the immediate plot of A Dangerous Legacy, but to becoming known. The feeling intensified as I read the epilogue and realized that new information was being presented – information that could not possibly be resolved in a few pages. Sure enough, Nick’s story will continue in A Daring Venture, releasing in 2018. This is part of what shows Camden’s skill as an author. Instead of trying to cram too much into this one novel or glossing over the additional story begging to be told, she allowed the glimpses to shine through and lay the groundwork that would allow a sequel to follow.

As with other Elizabeth Camden books, I recommend this for older teens through adults who love history and intrigue interwoven with some romance.

I am a homeschooling preacher's wife and content editor for the Well Planned Gal. But, I also love to write just for the fun of it. I also process best through writing, and my thoughts tend to flow from things I learn through the Bible, interacting with my family, and moving through life in general. Thanks for joining me in my not quite ordinary journey. View All Posts