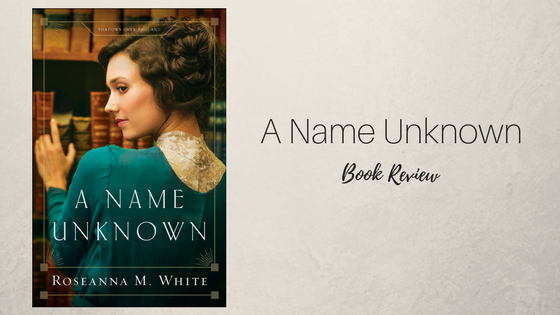 A Name Unknown is the first title in Roseanna M. White’s Shadows Over England series. Set in the early stages of World War I, A Name Unknown introduces readers to a rather unique London “family.” A family of thieves. Though none are related by blood, the dozen siblings care for one another with a love that is fierce, protective, and powerful. All are banded together by the oldest, a young man named Barclay, and all are watched over by a pub owner named Pauly. Together they survive by stealing from the rich to put food in their bellies and clothes on their backs.

Brilliant though their thievery may be, the family barely brings in enough resources to keep the many mouths fed. But, a mysterious stranger has picked up on the unique talents of the eldest members of the family, especially young Rosemary Gresham. He begins to offer her jobs, but the one he hands her now is the biggest – and highest paying – of them all. All she has to do is find proof that Peter Holstein, friend of the king, is a traitor.

The Holsteins, though Germans, had been highly thought of in their corner of Cornwall before their deaths. But, their son Peter is a different story. A recluse who mingles little with the people of the town, Peter struggles both at home and in the London political arena, fighting questions about his loyalty. But, with tensions in Europe on the rise, he is determined to prove once and for all that his heart and his loyalty lie with England. Unfortunately, any proof that may exist lies buried somewhere in the chaotic depths of what may have once been referred to as a library. Every potential employee he has found to help him tame the “cave” has fled in horror upon seeing the nature of the task…until a young woman by the name of Rosemary arrives at his door and agrees to tackle the job.

Roseanna M. White weaves a captivating story of character, history, intrigue, mystery, and yes, even romance in A Name Unknown. But, as I read, I had a struggle. Because I’d agreed to review it, I knew what the second book would be about. And I knew that getting to the second book meant that some of the events of the first book would most likely end up being either lame, overly contrived, or boringly predictable. I was delighted to find none of those as the story drew to a close. It was well written, captivating, and powerful in every way. It did not take me long to decide to own my own copy instead of just enjoying the library’s, since I’d soon have the second book anyway.

A Name Unknown is unique in its heroes and delightful in its twists. And I definitely recommend it to historical romance loving readers from the teen years on up.

Check back next week for my review of the actual review book, A Song Unheard.