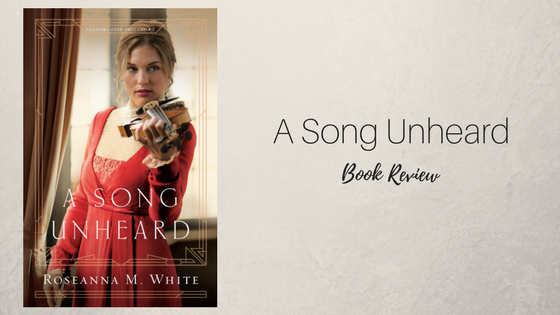 Sometimes accidentally requesting to review book two in a series has delightful results. Such was the case with Roseanna M. White’s Shadows Over England series. Having borrowed and read A Name Unknown, book one in the series, I was excited to dive into A Song Unheard.

The mysterious Mr. V has a new assignment for London’s most exceptional family of thieves, and this time the special skills of young Willa Forsythe make her the ideal choice. Willa has always loved music, but when a old, battered violin came into her possession, she discovered that genuine talent also flowed through her. Although formal training was never available, time spent in the alleys near the open windows of practice rooms or up in the rafters of performance halls fed Willa’s hunger for music and introduced her to new tunes she could then bring to life with her treasured instrument. So, when Mr. V needs someone to obtain a cypher key created by the father of famous Belgian violinist Lukas De Wilde, the musically-minded Willa is the obvious choice.

After barely escaping with their lives, Belgian musicians have temporarily resettled in Wales where, thanks to the generosity of wealthy patrons, they prepare for concerts that will hopefully bring in finances to help fellow Belgians displaced or left starving by the German invasion. But Lukas De Wilde no longer cares about his incredible talent or once-enjoyed fame. Instead, he thinks only of returning to Belgium to find his lost mother and sister. When the fascinating Willa Forsythe arrives in town, his anxious heart is soothed somewhat by the discovery of a raw talent that far surpasses his own. Her passion, her strength, and even her stubbornness captivate his imagination, and he is determined to provide the formal skills she lacks and free her natural talent to truly blossom.

As I picked up A Song Unheard, I confess that I expected to discover a formula, of sorts, to the series. I was still excited about the book, because I knew the author could make even a formulaic novel feel captivating! But, as I began to read, I quickly realized that this second book of the series would be as unique and fresh as A Name Unknown. From the relationship between Lukas and Willa to the progression of Willa’s assignment, this story weaves history and fiction together in a beautiful glimpse of life in the early stages of World War I. Readers are taken from the streets of Wales to the depths of occupied Belgium and back again with a look at the struggle experienced on both sides of the English Channel. As with the first book in the series, this second installment was creative and captivating, full of unexpected developments, sparks of joy, and depths of heartache.

A Song Unheard is definitely a book I will both share and reread, and I greatly look forward to An Hour Unspent, book three in the Shadows Over England series.