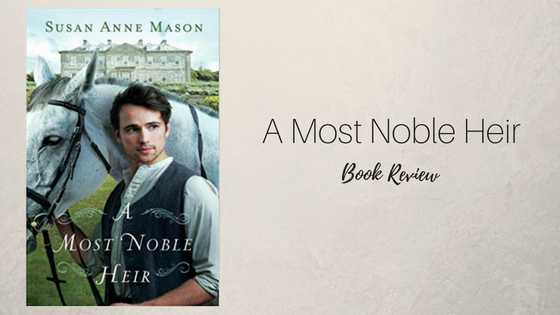 We all think we love – and would love to live – a good “rags to riches” story. But the reality of rising from one social context to another never runs as smoothly as the glorious fairy tales like to reflect. The struggle, rather than the fairy tale, is what is reflected in Susan Anne Mason’s A Most Noble Heir.

Nolan Price is perfectly at home in the stables, caring for the Earl of Stainsby’s horses. But Nolan’s real passion is for a place of his own with his beloved Hannah Burnham by his side. Just as those plans are coming together, however, his mother’s deathbed confession destroys every hope in an instant. Nolan is the earl’s son and rightful heir. His place is no longer in the stables but in the earl’s home, living as befits his station. Nolan wants none of it, and he is determined to move forward with his own plans. The earl, however, has no intention of letting Nolan go – and he has the power and authority to ensure his will is enforced, no matter the cost.

As can be imagined, the interactions and relational dynamics of A Most Noble Heir are intense. Every relationship Nolan holds dear is stretched and strained, and the one relationship he never had but truly wanted has now been forced upon him in a most undesirable way. At the risk of spoiling the story a bit, I must confess that Nolan’s reactions to his life upheaval left me preferring every other character – even the earl himself! – over Nolan. I wanted him to be, well, noble. I wanted to see what it was about this man that made Hannah fall in love with him. Looking back, though, I realize that what I wanted was fluffy idealism. The picture Mason has painted in A Most Noble Heir is a realistic one, depicting a young man with good character but an untried heart. His life, while encumbered with the challenges of servitude and relatively low station, has not truly been stretched. The sudden upheaval of everything he held dear stretches and strains him, revealing flaws that need purification and youth that needs maturation. Although I still find myself drawn more solidly toward other characters in the book, I see that Nolan is much more the picture of the noble heir than I initially believed him to be.

So, where does that leave the book as a whole? Despite the potentially heavy subject matter of A Most Noble Heir, this is a quick and easy read, full of sweet moments and even a touch of humor. Being married to a church history nerd, I did notice that a more modern concept of faith was incorporated into the narrative. While it will seem very fitting to contemporary readers, it is not an accurate historical depiction of what Christianity would have looked like, even for those with a solid and intimate relationship with the Lord. This does not distract from the story itself – it is simply a reminder that our appetite for both history and theology may be whetted by fiction, but we can never be content to allow fiction to be our main course in either discipline.

The storyline moves along at a good pace, and a small thread of mystery weaves its way throughout the narrative, leaving the reader wondering what other forces are working behind the scenes. Lessons are learned, character is developed, and a few surprises are worked in along the way. All in all, A Most Noble Heir is a fun read for lovers of late 19th century historical fiction.