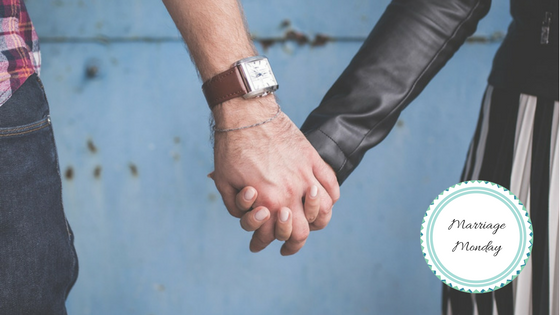 I really intended to write a nice, sweet, romantic post for Marriage Monday yesterday in honor of Valentine’s Day. Then, then day happened.

The previous week had been long and chaotic with some frustrating and tense moments worked in. Then, Sunday night, we came home to find that our daughter’s cat was missing. After calling, looking, and calling some more, we finally went to bed, but I think all of us kept one ear open, hoping she’d return. She’d never wandered far before.

Morning dawned, and we finally found the cat…forty to fifty feet up a neighbor’s tree.

After trying unsuccessfully to call, woo, and cajole her down, we finally looked at the clocks, realized we were all an hour late to school and work, and called it quits for the time being. It was only after my sweet hubby headed to work and I walked in to get the kids going on school that we realized we’d not even had breakfast yet.

The rest of the day was spent trying to juggle work and coax the cat out of the tree – unsuccessfully, I might add.

The idea of sweet romance was just not a present reality at any point during our Monday, and may not be today, either. And yet, I can’t help but think that what we shared yesterday – and will share today – is much more of an honor to the memory of St. Valentine.

The historical facts about Valentinus are pretty fuzzy, and it is difficult to distinguish fact from legend. But, it is known that he did exist and that he was put to death for secretly performing weddings when the Roman emperor outlawed marriage. For some odd reason, Roman soldiers didn’t seem to want to spend twenty-five years away from their families fighting wars on behalf of Rome, so it was growing increasingly difficult for Emperor Claudius II to build and maintain an army. Outlawing marriage was the obvious solution, at least in the emperor’s mind! But, Valentinus believed that marriage was holy and sacred. He would not turn down a couple asking him to marry them.

That decision cost Valentinus his life.

I love the romantic side of marriage. And I thoroughly enjoy celebrating it. But, as we recover from yesterday’s tension and walk into this Valentine’s Day simply trying to get Tuesday on track after another late start (we finally recruited a tree service to help get the cat down from her lofty perch!), I realize just how beautiful it is to rest confidently in the love of my husband. Even when we’re stressed or frustrated because of the curve balls life is throwing us. Even when I do and say things that frustrate him. The love we share is deep and true. It runs up on bumps and hits snags. It has to work hard to stay thriving. But, it is the foundation of the marital union that Valentinus held so sacred.

Whether with roses and chocolates or just with hugs that say, “We’re going to make it,” that is what we celebrate today. A love grounded in Christ. A love that a priest named Valentinus considered worth dying for – because his Savior had already died for it!